How Can Seattle Be Hungry?

It’s no secret that Seattle is the fastest-growing city in the country.  With a staggering tech boom, dozens of construction cranes dotting the skyline, and housing prices climbing at an alarming rate – Seattle is a model for economic prosperity.

But not everyone is cashing in on the gold rush.

As Seattle continues to grow, so does the need for nutritious food for several thousand of it’s residents.

According to Forbes Magazine, Seattle now has the fourth-largest income gap in the country. This leaves 14 percent of Seattle’s families at or below the poverty level.

And with poverty, comes hunger.

Food Lifeline rescues food from farmers, manufacturers, grocery stores, and restaurants – and provides the food to more than 300 food banks, shelters and meal programs across Western Washington. Every day, the Seattle-based nonprofit creates the equivalent of 116,000 meals for these programs.

But it’s not nearly enough.

“We provide our food banks with roughly 40 percent of the food they distribute. And yet nutritious food, especially produce, is still in very high demand,” says Nageotte.

According to Curbed.com, the number of Seattle neighborhoods with high poverty rates has doubled since 2000, with an alarming percentage of seniors in those ranks.

Much of this has to do with higher rents. The median rent in Seattle has increased by nearly 40 percent in the past five years. With higher rents, come the tough choices.

“When housing costs rise, those in poverty are forced to choose between food and rent or utilities,” says Nageotte. “We have seniors that are having to choose between a trip to the grocery store and filling a prescription.”

In past years, the answer to a high cost of living was to move to the suburbs, but today rents have increased there as well.

Sherry Brown is a 62-year-old resident of the Renton Housing Authority. Today she’s lining up for a food distribution sponsored by Food Lifeline. She’s cheerful as she visits with neighbors, but that cheer is tempered when she talks about her finances. 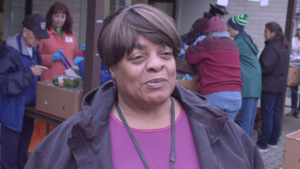 “I’m on social security, and I get $915 per month. Forty percent of that goes to housing, then I have utilities, and I pay for my diabetes medicine,” says Brown. “There’s not much left after that, so this is wonderful.”

Brown picks out some fresh cucumbers, avocados, and some spinach from the folding table outside of the senior center. The volunteers chat with her about the weather, the Seahawks, and what’s for dinner. Brown seems happy. Happy enough to share a secret with us.

“I go home, I put all of these groceries in the fridge, then I take a picture.”

“We want to provide them with nutritious foods that they like” says Leah Rapalee, Food Lifeline’s Community Programs Manager. Rapalee organizes this monthly distribution, making sure the delivery is loaded with fresh produce. “We want to make sure they have the foods they need to maintain their health”.

So while the region continues to grow, so does the problem of hunger, challenging the old adage of a “rising tide raising all boats.”

According to Nageotte, the “why” isn’t complicated.

“There’s no secret to what causes hunger. It’s poverty. When you have money, you eat. When you don’t, you are hungry.”

That’s why Food Lifeline supports groups that are working to end poverty. By providing food to agencies that aren’t food banks or meal programs, they help these groups free up funds for mission-driven projects.

Chef Tom French is the food manager for Mary’s Place, an organization that provides shelter and transitional housing for women and children in and around Seattle. Today French is picking up food at Food Lifeline’s Hunger Solution Center. Food that will help him keep his organization’s budget in check.

“Everything that was here today, I would have normally purchased, so it’s a substantial cost saving,” French says. 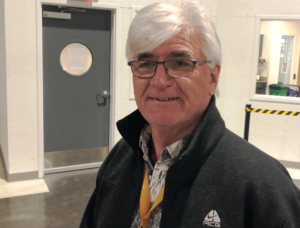 As French loads the fresh romaine lettuce, the Willamette Valley potatoes, and the colorful squash onto his cart – he gives us the bottom line.

“For us, every dollar we don’t spend on food goes to housing, that’s the bottom line for us.”

While business is booming, local companies are becoming some of Food Lifeline’s best partners for feeding hungry neighbors.

“We move food in bulk, millions of pounds that need to be sorted and repacked for distribution to our agency partners. This takes 13,000 volunteers every year,” says Food Lifeline’s Director of Volunteer Engagement, Renee DeRosier. “More than half of these volunteers are coming from corporations. They have a commitment to their community, and it shows.”

These same companies also sponsor matching donations for their employees and make regular gifts to the hunger relief effort. But it will take more than one business sector to solve to solve hunger in our city. It will take everyone. According to Nageotte, the task is huge, but the answer is simple.

More Than Just an Intern